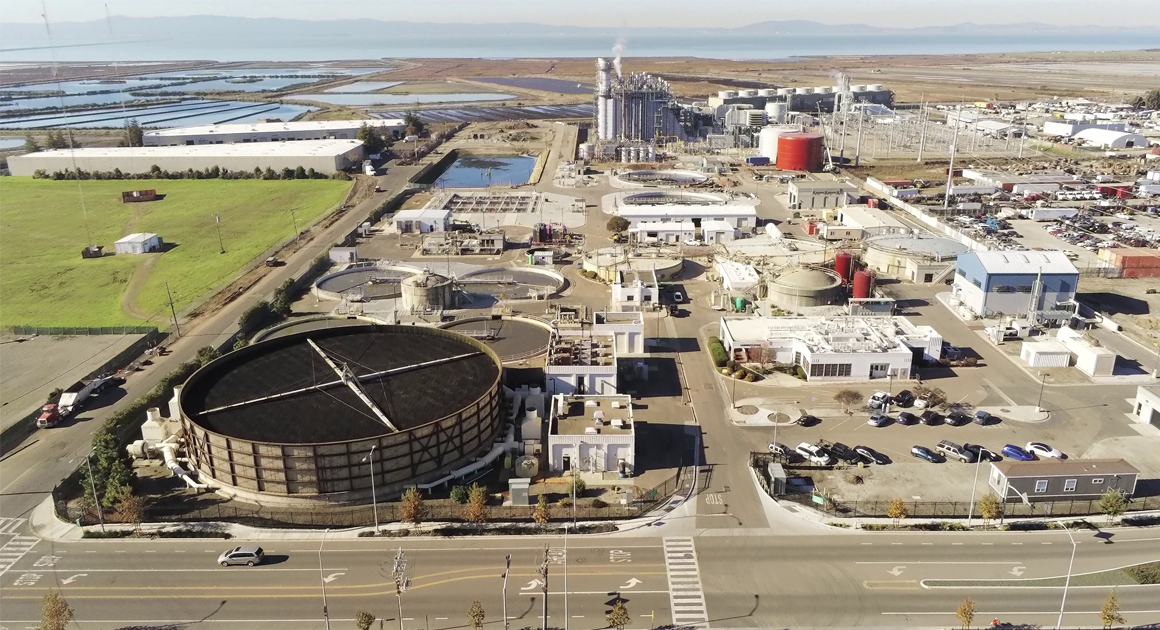 HAYWARD, Calif. — The City of Hayward (City) is making significant improvements at its Water Pollution Control Facility (WPCF) to serve a growing population, rehabilitate aging infrastructure, and improve the quality of purified water released to the San Francisco Bay.

Known as the “Heart of the Bay,” Hayward is the sixth-largest city in the Bay Area with over 163,000 residents. The WPCF, originally constructed in 1952, treats an average of 11.3 million gallons per day (MGD) of wastewater before it is pumped to a facility operated by the East Bay Dischargers Authority where it is dechlorinated and discharged into the bay via a deep-water outfall.

Modifications are planned at the WPCF to meet anticipated nutrient discharge regulations and accommodate increased wastewater flows and loads as Hayward’s population is forecasted to grow by approximately 33 percent from 2015 to 2050, according to the Association of Bay Area Governments. Ultimately, the upgrades will position the City as an early adopter of nutrient reduction solutions that will protect vital ecosystems in the bay.

The project is a key part of the City’s plan to improve its aging infrastructure as described by Director of Public Works and Utilities Alex Ameri:

“As the center of the dynamic Bay Area, Hayward continues to plan for the future, working hard to balance the needs of our growing population with the preservation of open space and an aggressive economic development strategy. This important project is critical to protecting the bay while maintaining excellent service to our vibrant communities.”

The City has enlisted Brown and Caldwell for preliminary and final design services for the improvements. As prime consultant, the firm will develop solutions to incorporate biological nutrient removal, primarily nitrogen, in the facility’s treatment process to meet nutrient limits for treated effluent discharges to the bay as regulated by the San Francisco Bay Regional Water Quality Control Board. Such solutions will provide flexibility to accommodate expansion using conventional treatment methods or process intensification using new technologies to avoid building new treatment tanks, depending on future needs and evolving regulations.

With an eye on climate change impacts, including potential flooding and rising groundwater resulting from sea level rise, the upgraded facilities will be designed to improve resiliency.

Brown and Caldwell will also prepare a comprehensive biosolids and renewable energy master plan that considers the impact of the nutrient upgrades on the existing solids handling capacity at the plant and sustainable management of the useful organic material produced in the treatment process. The plan will include resource recovery and beneficial reuse recommendations in alignment with the City’s sustainability goals. Furthermore, the plan will provide a framework to help Hayward comply with Senate Bill 1383, which requires reducing California’s organic waste sent to solid waste landfills by 75 percent by 2025 as part of the state’s plan to reduce greenhouse gas emissions.

“We commend the City for its forward planning and commitment to environmental stewardship,” said Brown and Caldwell Principal-in-Charge Fran Burlingham. “Our team is honored to help deliver the plant of the future and position Hayward for continued success.”

Final design of the improvements is scheduled for summer 2024 with construction anticipated for completion by spring 2028.