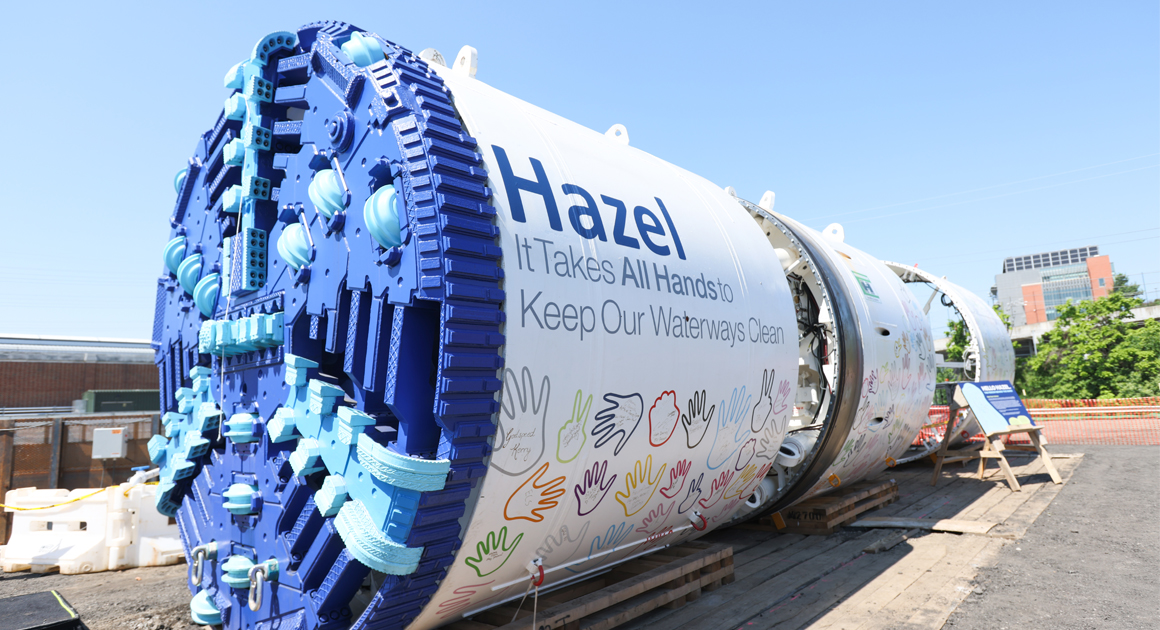 Making its way from Schwanau, Germany, to Alexandria, a welcome reception was held on July 14 to celebrate Hazel’s arrival, with over 100 attendees including City of Alexandria Mayor Justin Wilson.

“Today is a monumental day for Alexandria and our waterways. It’s a huge step forward in our commitment to deliver healthier waterways by 2025.”

Typically, a TBM is named prior to launch per 14th-century mining traditions. TBMs have historically carried a feminine name, as underground workers looked to Saint Barbara for protection. Keeping with this long-standing custom, AlexRenew nominated the names of six women whose outstanding contributions to Alexandria, the environment, or the engineering and construction fields, have paved the way for countless others.

As voted by Alexandrians via an online poll, the TBM was unveiled at the ceremony as “Hazel,” in recognition of Hazel Johnson, one of America’s leading women pioneers for environmental justice who dedicated her life to fixing ecological issues.

Hazel will dig a 12-foot-wide, two-mile-long tunnel to divert approximately 120 million gallons of sewage annually away from Alexandria’s waterways.

The arrival and dedication of the TBM is a major milestone for RiverRenew, the largest infrastructure project in Alexandria’s history, and a critical part of meeting a state-mandated deadline to remediate combined sewer overflows by July 1, 2025. Once lowered more than 100 feet below ground, Hazel will build the new two-mile Waterfront Tunnel with little service interruption on a journey estimated to take just over a year to complete.

After completion, the RiverRenew tunnel system will prevent over 120 million gallons of combined sewage from polluting the Potomac River, Hunting Creek, and Hooffs Run each year.

Leading environmental engineering and construction services firm Brown and Caldwell serves as the Owner’s Advisor on the RiverRenew program.

“It really is a generational project — for us as engineers and planners — but also for Alexandria and future generations who will benefit from healthier waterways,” said Brown and Caldwell Project Manager Justin Carl.

Led by a five-member citizen board, Alexandria Renew Enterprises (AlexRenew) is a special purpose authority that has been serving the City of Alexandria and parts of Fairfax County for nearly 70 years. AlexRenew purifies 13 billion gallons of wastewater annually, from more than 300,000 people, at its water resource recovery facility, located in Alexandria’s southwest quadrant.

Dr. Bell joins team of scholars to help advance research and education at the water–energy nexus

What it is, next steps, and resources to help you prepare