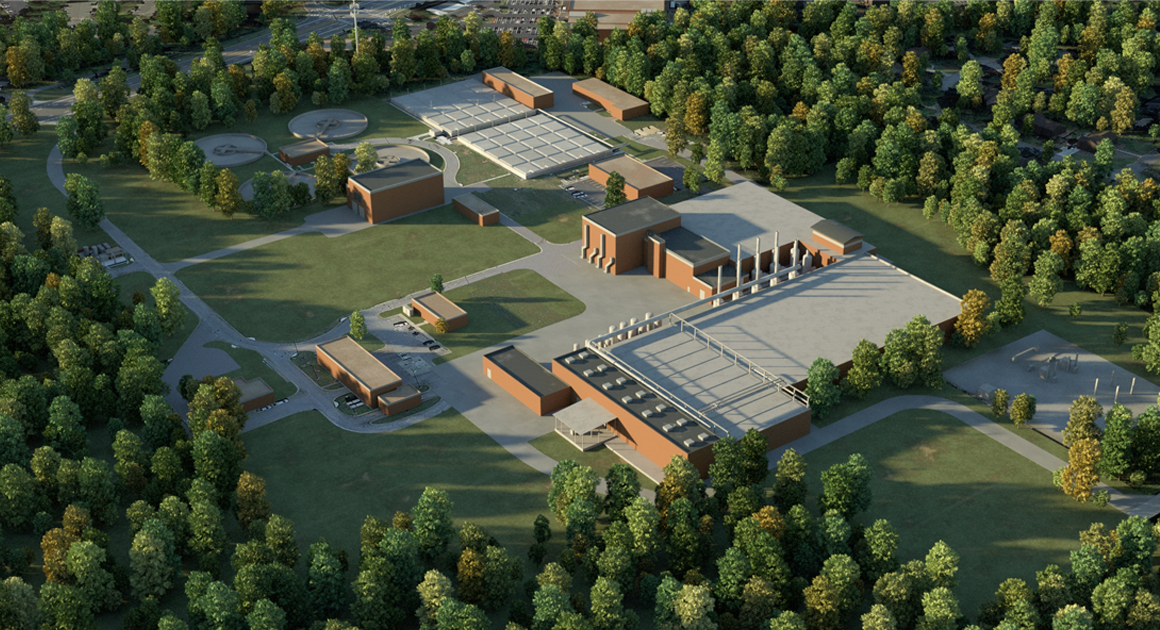 ATLANTA – Construction of large-scale expansions to the Big Creek Water Reclamation Facility in Roswell, Georgia, is officially underway. The Fulton County Department of Public Works’ $300 million project, the largest single capital expansion project in Fulton County’s history, is being delivered by the design-build joint venture of Archer Western and Brown and Caldwell.

When the plant was originally constructed in 1969, it had a treatment capacity of roughly 0.75 million gallons per day (MGD). Over the years, to keep up with the region’s exponential growth, it has been expanded to 24 MGD. As numerous areas of the facility near the end of useful life and in anticipation of further population increases and economic development, the facility is being upgraded and expanded via the progressive design-build process to a capacity of 32 MGD.

Key elements of the project include coarse screening and grit removal, primary clarification, biological nutrient removal, flat plate membrane filtration, offline equalization tanks, aerobic digesters, new electrical and instrumentation infrastructure, and ultraviolet and post-aeration of effluent. Care has been taken to design a project that will reduce light, noise, and odor from leaving the facility and will provide significant quality of life improvements to the surrounding neighborhood. The new treatment process, incorporating state-of-the-art membrane technology, will produce significantly cleaner water than the existing plant. Even at the higher flow capacity, discharges to the river will be reduced by up to 50% from current permit limits. Construction crews will also demolish and repurpose various older or underused sections of the facility. Efforts will be made to recycle existing site materials, eliminating up to 10,000 truckloads of landfill disposal.

Construction is expected to follow a 46-month schedule and conclude in 2024.

“Fulton County is committed to protecting the Chattahoochee River, our most important natural resource. This important, landmark project reflects our dedication to providing the highest quality services to our citizens in an environmentally sound way while still allowing the growth and economic development throughout the North Fulton County area.”
Fulton County Public Works Director David Clark

The project is the latest collaboration between Archer Western and Brown and Caldwell. The team previously partnered on the delivery of Fulton County’s multi-award-winning Johns Creek Environmental Campus Design-Build project.

Low-DO BNR: Research program looks at how to do it cost-effectively and at full-scale