Potable reuse: Where we've been and where we're headed 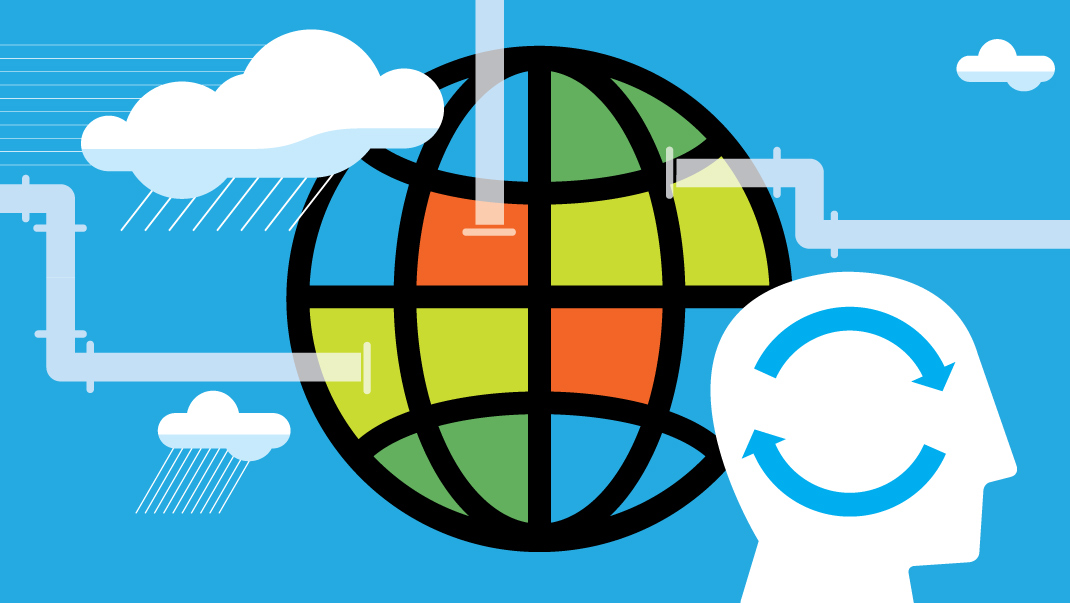 As traditional water supply management strategies are challenged by the uncertainty of climate change and shifting customer demands, many regions across the United States are adopting new strategies for expanding locally controlled water supplies. In particular, severe drought conditions in California have motivated water utilities to expand recycled water use beyond traditional applications, such as irrigation and industrial cooling, to potable reuse.

Potable reuse represents a spectrum of applications from indirect potable reuse (IPR) to direct potable reuse (DPR). IPR projects involve application of tertiary filtered and disinfected nonpotable recycled water through surface spreading, or the application of purified water that has gone through a multi-barrier advanced water treatment system for groundwater recharge or surface water augmentation (addition to a raw water reservoir). IPR is considered indirect because a natural environmental buffer (e.g., the ground in aquifer recharge and the reservoir in surface water augmentation) is provided between the point of injection and where it is withdrawn for potable water use.

In the case of groundwater recharge applications, additional virus removal credits (one log removal credit per one month of travel time) is granted as the purified water travels between the injection location and where it is pumped out of the ground for potable water use/treatment. DPR refers to a system without an environmental buffer; purified water is added directly upstream of a water treatment plant or even directly into the distribution system. Collectively, IPR and DPR are referred to as “potable reuse.”

In planning and developing new potable reuse programs, one should consider the lessons learned from “where we’ve been,” while focusing on “where we’re headed” in terms of augmenting existing water supplies with an alternative safe and reliable water supply.

These programs began with similar full advanced treatment (FAT) trains that consist of microfiltration (MF), reverse osmosis (RO), and an ultraviolet light (UV)-based advanced oxidation process (AOP) with hydrogen peroxide; however, each utility has taken a different optimization approach to enhance performance, water quality and reliability to meet specific needs. Notable recent improvements undertaken at these facilities are listed in the following paragraphs.

West Basin produces five “designer” waters through its ECLWRF and satellite facilities. To enhance treatment performance and reliability of the membrane systems at ECLWRF, ozone pretreatment was added ahead of the MF system during the Phase V expansion (completed in 2013). The aim of the ozone pretreatment system upgrades was to break down organic matter and improve overall feed water quality for downstream membrane processes to reduce MF and RO membrane-fouling potential and cleaning requirements.

Because of footprint limitations at the LVLWTF, WRD implemented a new MF backwash recovery system and reconfigured the RO system setup to increase overall recovery within the existing plant’s footprint during the expansion of the LVLWTF that was completed in 2014. The existing two-stage RO system was supplemented by a new, separate third-stage RO to increase overall recovery to approximately 92% (USEPA & CDM Smith 2012). Because the third stage would experience a much higher scaling potential at this high recovery, it would undergo more frequent clean-in-place (CIP) than the first and second stages of the RO system. By separating out the third-stage RO system, a CIP could be conducted on the third-stage RO while still operating the first and second RO stages. This design approach allowed WRD to expand the RO system capacity without having to modify its permit for concentrate discharge capacity.

Guidance for the future

Efforts across the United States are building on these well-established potable reuse programs to develop guidelines for new applications, create innovative solutions to maximize recovery, and better understand treatment process boundaries. These efforts inform “where we’re headed” with potable reuse as it is broadened beyond groundwater replenishment to include surface water augmentation and DPR. A brief summary of several ongoing research, pilot, and demonstration-scale efforts is provided in the following paragraphs.

Pilot- and demonstration-scale testing efforts at the City of San Diego (Calif.) have demonstrated the viability of potable reuse via surface water augmentation at the San Vicente Reservoir. The large storage volume available in the San Vincente Reservoir provides more than six months of retention time and sufficient dilution/mixing options to achieve necessary log removal credits after the FAT train.

The City of San Diego is now working with regulators to consider augmenting the Miramar Reservoir, which provides less than six months of retention time. To compensate for the reduced retention time, the system will incorporate additional treatment barriers, ozone, and biologically activated carbon (BAC) filtration in front of the FAT train (MF–RO–UV–AOP) and rigorous enforcement of the operational and management protocol to enhance the reliability, redundancy, robustness and resilience of the system to protect public health.

The City of Oxnard (Calif.) is pilot-testing potable reuse via aquifer storage and recovery, in which purified water is injected into a confined groundwater aquifer for the regulated retention time before it is pumped out of the same well(s) and treated for potable use. This approach can provide storage during periods of low demand while offsetting demands during periods of increased water use. This provides the City of Oxnard with flexibility for potable use, recharging the aquifer, and/or maintaining a seawater intrusion barrier.

Leaving RO membranes out of the treatment train eliminates any need for brine management, which may be a fatal flaw in locations where brine treatment and/or disposal is not feasible. The City of Los Angeles Bureau of Sanitation is also evaluating various non-RO-based potable reuse treatment trains (e.g., ozone–BAC–soil aquifer treatment) to maximize water recovery for groundwater recharge via surface spreading.

Development of sensor technology and critical control points is important to ensure treatment reliability and early detection of potential operational issues. For example, Monitoring for Reliability and Process Control of Potable Reuse Applications (Pepper & Snyder 2016) examined AWPF unit process monitoring systems to evaluate the incidence and effect of false positives, false negatives, real-time detection of chemical and microbial contaminants, identification of potential treatment failures, and sensor maintenance and self-monitoring. Evaluation at the lab—pilot and full-scale—found that online sensors are effective for process control and that real-time monitoring is feasible, but challenges, such as real time detection and data validation, still need to be overcome.

Development of an integrated treatment system from raw wastewater all the way through the advanced water purification process could better ensure reliability and resiliency. For example, WE&RF’s Evaluation of Source Water Control Options and the Impact of Selected Strategies on Direct Potable Reuse (Rimer 2016), looks at quantifying upstream wastewater treatment impacts on DPR source water quality and downstream advanced treatment processes. Variable influent water quality to the AWPF from diurnal waste discharges or periodic industrial discharges, as well as the extent of the source control strategy implemented (e.g., number and type of industries regulated, such as dry cleaners, specific compounds regulated to comply with drinking water requirements, and a pollutant prioritization program) have a direct impact on performance of the potable reuse treatment process train.

A review of existing source control programs for potable reuse facilities has indicated that each program is unique to the area, such as population served or number of industries in the service area, served by the wastewater treatment plant. The type of secondary treatment process and level of nutrient removal provided at the wastewater treatment plant could potentially be optimized to reduce contaminant loading (e.g., CECs) on the AWPF. Applying this to practice, OCWD has worked closely with the Orange County Sanitation District (OCSD) to identify priority constituents to be monitored (e.g., 1,4-dioxane and N-nitrosodimethylamine) and to optimize secondary treatment operations at OCSD’s Plant No. 1 to complement the AWPF.

Wendy Broley is the water reuse practice leader at Brown and Caldwell in San Diego, California.
Erin Mackey is a technical specialist for drinking water and reuse at Brown and Caldwell in Walnut Creek, California.
Sunny Wang is Brown and Caldwell’s water technology leader for Southern California. He has more than 15 years of experience in optimization and design of advanced water treatment technologies over a wide range of applications around the world, including potable reuse and desalination. He holds BS and MS degrees in environmental engineering from the University of California, Riverside.
Subscribe to BC Water News to receive more articles like this GET STARTED

Industrial water reuse and the need for UV treatment