Risk and reward in Cincinnati 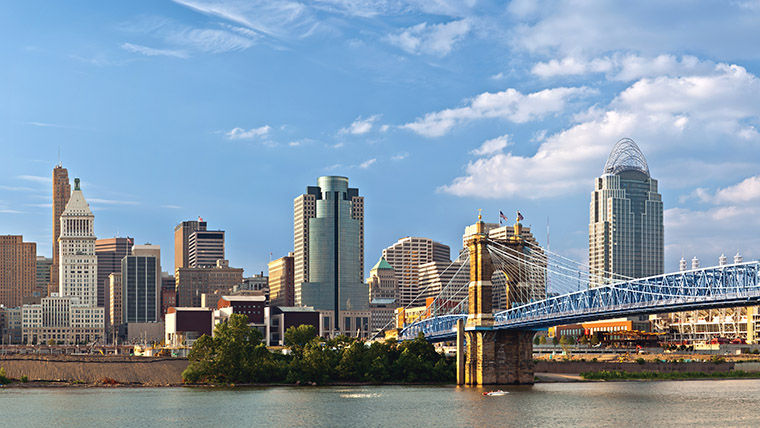 From Manhattan to Malibu, water and wastewater utility owners and managers are increasingly turning to bundled, full-service solutions for their infrastructure needs. A clear market trend has emerged, with more demand for integrated project delivery models, such as design-build, to collaboratively develop capital improvement projects that otherwise couldn’t be built.

These models are showing utility owners a better way to deliver projects – on time, on budget and with as few hiccups as possible. Design-build’s efficiency is also meeting demand from ratepayers who expect their utility owners to be good stewards of their tax dollars.

This first in a three-part series takes a look at the risks and rewards of a fast-track, design-build project in Cincinnati that overcame numerous, potentially disabling obstacles. Read on to learn how The Metropolitan Sewer District of Greater Cincinnati saved nearly $4 million in overall project costs and eventually garnered a Design Build Institute of America national award of merit.

Risks are inherent in any project, and managing them during a major water/wastewater project sometimes seems more like an art than a science. One of the benefits of design-build, though, is the ability of the design-builder and the owner to collaboratively identify and manage risk throughout the project’s life cycle. Going further, design-build’s potential to transform risks into opportunities can produce better results.

“Historically, on design-bid-build projects the engineer resists taking on risk because, by nature, engineers are very conservative. And the contractor just builds what’s specified, working hard to shift performance risk to the owner and engineer to further their commercial interests,” said Steve Gates, senior vice president at Brown and Caldwell. “With design-build contracting, an owner can more effectively and completely assign project performance risk to the design-builder.”

As one owner metaphorically put it, Gates recalled: “I like having one throat to choke.”

Risk and reward defined a fast-track project in Cincinnati two years ago. A real estate development group had already broken ground on a new commercial space in the city when it realized it needed to connect to a stormwater outlet and make other adjustments to ensure proper water and sewer service. 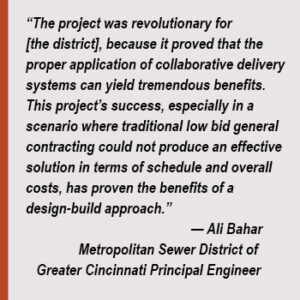 The Metropolitan Sewer District of Greater Cincinnati called in a BC design-build team. “The district had to go fast and furious, so they went with the design-build process,” said Tim Koch, Brown and Caldwell vice president for Midwest regional wastewater practice. “The main reason was the tight schedule. There’s no way they could go design-bid-build and meet their deadline.”

Uncertainties abounded as the project launched, and there was pressure to move quickly because the real estate group had an opening-day deadline. “There were lots of unknown subsurface conditions,” Koch said. “There were all these unforeseen underground obstacles because it was an old, abandoned industrial area.” The team hit underground telephone lines, previously unknown gas piping, and a 36-inch water main valve “that wasn’t supposed to be there,” Koch said.

But as challenges arose, the design-build team and project owner were able to collaborate, gauge risks and reach solutions on a daily basis, instead of creating change orders and funneling proposals back through a lengthy city approval process.

“We kept a list of all the things we encountered,” Koch said. “Instead of doing a change order for every item, we agreed as a team, in partnership with MSD, to wait until the end. We couldn’t afford the time it would take to go through the city’s approval process. The design-build team would come up with solutions and say, ‘Why don’t we do this?’ Usually, they’ll just do what’s in the plans. It was a leap of faith for all parties, but we ended up working together successfully.”

One risk arose when the contractor encountered the foundation of an abandoned, underground building beneath the entrance ramp of Interstate 71, raising the possibility of delays on the project.

“We were routing our tunnel underground and we were going between two concrete columns that support the highway. We were trying to go right between them when we ran into the underground structure,” Koch said.

The design-build team was able to reroute the tunnel between one of the columns and the underground structure. “There was barely enough room,” Koch recalled. “We all said, ‘Take a risk and give it a try.’”

The tunneling decision was not the only risk to pay off. It initially appeared a water line would have to be rerouted, but the team realized it could stay put. Certain pipes, deemed unnecessary, were deleted from the plans. By replacing the material used for one pipe, the district managed to cut $25,000 with a single change.

The outcome: The owner saved $3.6 million in overall project costs and the team met an aggressive 21-month schedule. And “an abandoned, old, awful area in an industrial part of town is now a nice, new section with restaurants, offices and a theater,” Koch said.

The benefits of design-build will be easy to speak about. Koch says it could not have been done using the design-bid-build process. “If we had gone design-bid-build, I think the project would’ve lasted another year. We never would’ve completed the project in time, and it would have been a lot more expensive. Design-build was definitely a big part of the money and schedule savings,” he said.

“The project was revolutionary for [the district], because it proved that the proper application of collaborative delivery systems can yield tremendous benefits,” Bahar said. “This project’s success, especially in a scenario where traditional low-bid general contracting could not produce an effective solution in terms of schedule and overall costs, has proven the benefits of a design-build approach.”

Tim Koch is a Vice President with Brown and Caldwell leading the Midwest IPD practice. Koch specializes in wastewater treatment plant and pumping station planning and design. He was the project principal on the Oakley Station Separation Sewer Design-Build project for the Metropolitan Sewer District in Cincinnati.
Sara Jerome is a freelance reporter who has covered business and policy for the Financial Times Group, the National Journal, The Hill and Water Online.
Subscribe to BC Water News to receive more articles like this GET STARTED