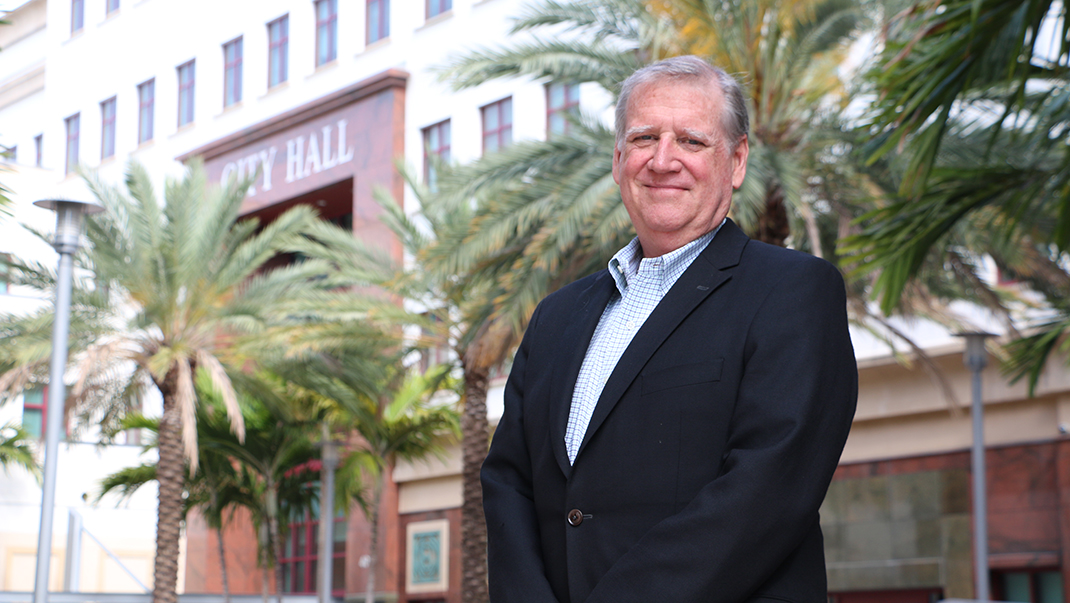 As Assistant City Administrator for West Palm Beach, Fla., Scott Kelly realizes that a One Water approach is vital to ensure that his community has a reliable and resilient water supply. He talked with Albert Perez, senior director who oversees BC’s Florida Operations, about how this coastal city took on the challenges of climate change, sea-level rise and sustainable water resources.

Tell us about challenges your agency faced in the development of sustainable water supplies?
In 2011, West Palm Beach experienced the most severe drought in the city’s recorded history, putting pressure on the existing water supply infrastructure and prompting the city to implement emergency measures to ensure uninterrupted service for residents.

The city depended on a water supply system that was primarily sustained by surface water supplies, including Lake Okeechobee and a water catchment area named Grassy Waters. The Grassy Waters Preserve is a 23-square-mile ecosystem that is a remnant of the original Everglades. This habitat supports several endangered species, including the Everglades Snail Kite, in addition to providing a water supply for the city and the Loxahatchee River, one of two Wild and Scenic Rivers in Florida.  At the same time, the city was impacted by an increase in flooding along its 10-mile waterfront due to sea-level rise. Stormwater discharge of freshwater to the coastal estuary systems had also caused environmental damage, such as reductions in mangroves and sea grasses.

Because of the drought, harmful discharges to the estuary and concerns due to visible impacts of climate change, the city determined that it would need to switch to an integrated One Water approach to ensure future reliability and resiliency of its water supply, the Grassy Waters Preserve ecosystem and the coastal estuary.

What was the approach you took to overcome water supply challenges?
An adaptive water supply plan coupled with a living stormwater master plan under a One Water framework. A city-scaled climate change and sea-level rise analysis and planning was incorporated in the framework. The city linked two powerful tools — the Stockholm Environmental Institute (SEI-US) Water Evaluation and Planning (WEAP) model and multi-criteria decision analysis (MCDA) — and used scenario-based planning methods to evaluate and select alternatives under different combinations of future population and climate projections. A series of stakeholder meetings was designed to develop a shared understanding of the trade-offs in these complex decisions. At the same time, the city conducted a comprehensive stormwater master planning process.

Our mayor, Jeri Muoio, also created an active Mayor’s Office of Sustainability, which offers rich and diverse leadership in integrated water resources topics, including water conservation and climate change/sea-level rise. She provided the leadership that culminated in the award of West Palm Beach for national excellence in sustainability as a Certified 4-STAR Community by STAR Communities, a nonprofit organization that evaluates and certifies sustainable communities.

West Palm Beach is one of nine cities in the state to commit to the Global Covenant of Mayors for Climate and Energy, the world’s largest coalition of city leaders who have pledged to reduce and prepare for the impacts of climate change.  As part of this program, the city recently set a greenhouse gas reduction target for the community of net zero emissions by 2050. The city also serves as a municipal representative for the Southeast Florida Regional Climate Change Compact to coordinate climate change mitigation and adaptation activities in Southeast Florida.

How has One Water helped improve your water supplies?
The planning process has resulted in an integrated One Water System that augments surface water supply with stormwater harvesting, aquifer storage and recovery, sustainable shallow groundwater wells and wastewater reuse. Since the historic drought of 2011, the city has completed the planned water supply investments to ensure that West Palm Beach’s water supply will be consistently reliable through 2065 under mid-level water demand forecasting. If circumstances dictate, there is ample time to implement new water supply projects using an adaptive management approach.

Ancillary benefits to the city have been lower flood insurance premiums, modernized floodplain maps, reduced stormwater discharge to the coastal estuary and a better-defined plan for management of the One Water System.

What’s something people might be surprised to know about your agency?
The West Palm Beach Water Supply System has served an important role in the area since Henry Flagler, American industrialist and a founder of Standard Oil, became enthralled by a white-sand barrier island called Palm Beach, claiming he had found a veritable paradise. In his mind’s eye Americans would come to the area to play, relax and bask in the subtropical warmth.

In 1893, after purchasing portions of Palm Beach to accommodate his resort sites, Flagler purchased a 48-block area, which would become West Palm Beach, that would serve as both residence for his workforce and a bustling commercial hub to support his new American Riviera. To serve the emerging Palm Beach resorts as well as the commercial hub of West Palm Beach, Flagler built a water plant and set up the West Palm Beach Water Company. He purchased a piece of the headwaters of the Everglades (now known as Grassy Waters Preserve) and used the water to supply drinking water to the water plant.

The city purchased Grassy Waters as part of the acquisition of the water company in 1955 and, in 1964, this area was given protection for use as a water supply by a special act of the Florida Legislature. To this day, West Palm Beach still gets a large percentage of its water supply from Grassy Waters and supplies Palm Beach with its drinking water as originally envisioned by Flagler.

What’s on your to-do list?
In response to climate uncertainty, changing water supply management practices by the regional water regulatory agencies and ongoing development encroachments, the city has established an internal stakeholder group to strengthen its Watershed Management plan. The city also has certified its environmental management system under ISO 14001 and several internal stakeholders have been certified in Six Sigma methodologies.

The internal stakeholder group will need to enlist all these tools to address recent water quality concerns. Elevated harmful algal blooms in Lake Okeechobee underline long-term concerns regarding the lake as source water for the city. Water quality has now become the number one driver in the city’s future water supply planning.

Albert Perez is senior director who oversees Brown and Caldwell’s operations in Florida. He is a progressive and visionary leader with more than 20 years’ experience in the water and wastewater business sector.
Subscribe to BC Water News to receive more articles like this GET STARTED

Scott Kelly graduated with a B.S. in Civil Engineering from Georgia Institute of Technology and is a licensed Professional Engineer in the State of Florida. He serves as the Assistant City Administrator for the City of West Palm Beach, Fla., where he is responsible for Public Utilities, Sustainability, Parking, Public Works and Engineering areas.

Before his tenure in West Palm Beach, he was Vice President, Water and Wastewater Systems, for JEA, the water, wastewater and electric utility for Northeast Florida. At JEA, he was responsible for setting direction that grew the utility into the second largest water and wastewater utility in Florida.