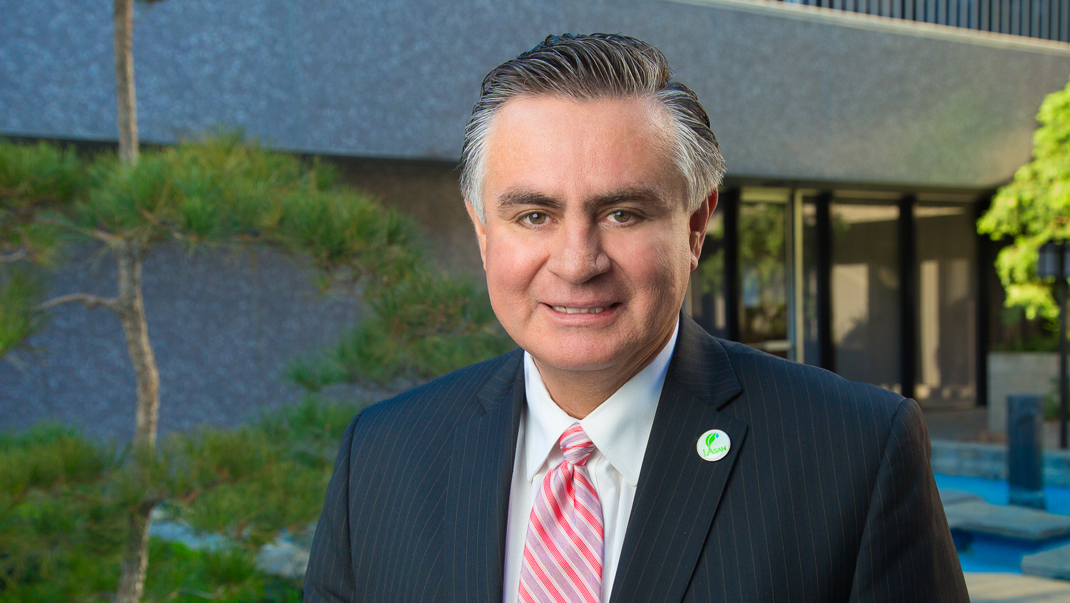 As new technologies, aging infrastructure and changing climates drive innovative One Water thinking and the Utility of the Future, Los Angeles sits on the cutting edge. Brown and Caldwell’s Senior Vice President Marc Damikolas and Executive Engineer Majid Karim recently sat down with Los Angeles Sanitation Director Enrique Zaldivar to talk about the city’s plan to treat all water as one and how officials got citizens on board with the previously unpalatable idea of potable reuse.

What is the genesis of the One Water LA 2040 plan?
One Water is a modern-day approach to water resources management. The concept is not new: We had done some stakeholder-driven planning in years past in the form of Integrated Resources Planning (IRP), but it never really had the comprehensive rallying effect that One Water does. IRP by name sounds more technical and technocratic, and it didn’t really have a spillover effect to the citizens, who are the ones with whom we really wanted to affect change. The term One Water, on the other hand, immediately has that impact — as if it’s a complete enlightenment. It had that impact on me.

The term began in some national circles with the National Association of Clean Water Agencies and the U.S. Water Alliance and others. Not long after Mayor Eric Garcetti was elected, in 2013, we were coincidentally hosting the U.S. Water Alliance meeting and we realized it was time that L.A. step up and champion One Water. Mayor Garcetti embraced it and we then began to use the term at the city level. While we cannot take credit for coining the term, we have adopted One Water in every sense.

The plan is just one part of a broader vision Los Angeles has for water resiliency. Can you share that vision?
What is so beautiful about One Water and the initiative itself is that it has had other derivative effects and benefits. One of them is the perfect dovetailing of One Water with the mayor’s larger vision of local resiliency. We brought all of the different phases of the water cycle and plugged them into the mayor’s call for developing local water supplies, resiliency and independence from imported water. One Water looks at wastewater as if it were just another source of water. Maybe three or four years ago there was some resistance to this concept, but I think we have largely overcome that.

What role do you think the drought has played in the timing of the plan or maybe just getting support for the plan?
It has had that incredible, unsolicited effect of bringing One Water to the forefront.  Under these circumstances, some water practices that might have been on the fringe of consideration — things like local stormwater capture — have clearly overcome the hurdle and have now become part of the mainstream strategy.

You know, of all of the aspects of water I believe that stormwater is the one that’s benefited the most from grassroots participation. Folks are coming from the environmental world; folks are coming from the community activist world, environmental justice, the scientific world. Not to make the wastewater world jealous, but the multiplicity of stakeholders is quite impressive.

With LASAN’s Hyperion Water Reclamation Plant treating 250 million gallons a day and a good portion of that being reused currently, what do you see in the future of reuse when it comes to these big sources?
There’s always this paradox: What should come first? Recycle the water or gain public buy-in? And this was definitely true for us producing recycled water and having a community that is there ready to take it. And so that had probably stood in the way of real progress. We have now subscribed more and more to a build-it-and-they-will-come kind of approach. We no longer believe we should wait until the customers are lined up waiting for the water.

As you know, these projects take years and years to bring into production so if we wait five years for the customers to line up, then that’s five years wasted. Instead we are moving ahead with the production at Hyperion, at Tillman, at Los Angeles-Glendale and our other facility at Terminal Island. And yes, we have faith that they will come. Our relationship with our partner Los Angeles Department of Water and Power is stronger than ever.

Speaking of relationships, how does LASAN rely on collaboration with key stakeholders and other cities to achieve its water goals?
The use of recycled water and stormwater definitely cannot happen without stakeholder collaboration. There’s no question. No one city is large enough and no one entity is powerful enough and smart enough to be able to do it alone. Stormwater by definition crosses boundaries of cities, counties and other jurisdictions. And so it’s essential, it’s imperative; it’s paramount to have collaboration.

What led you to a career in the water business?
Frankly, I happen to have had the timing right.  I graduated from college right at the start of the Clean Water Act which was adopted in the early 1980s.  I walked right into the program and I’ve been riding on that kayak ever since.

What are you doing when you’re not guiding Los Angeles’ water future?
There is no time for anything else. [Just kidding.] I do have a personal life. My wife, Brenda, and I have three kids, Carina, Alonzo and Enrique Jr. My eldest son is old enough to play golf with me now and he’s much better than me, but I’m happy to have him beat me.

Industrial water reuse and the need for UV treatment

Enrique Zaldivar was originally appointed Director and General Manager of the Bureau of Sanitation in 2007 and reappointed by Mayor Eric Garcetti in September 2013. LASAN oversees the City of Los Angeles Clean Water, Solid Resources and Watershed Protection programs, which combined have a revenue value of over $1.1 billion, with a staff of 3,000 employees. LASAN is also the lead environmental agency for the City of Los Angeles.

Through LASAN’s efforts, the city has been at the forefront of environmental stewardship, from the restoration of Santa Monica Bay, to achieving one of the highest recycling rates among large cities in the world – over 76 percent – to the implementation of the Low Impact Development Ordinance for stormwater capture and infiltration. Mayor Garcetti has made environmental sustainability one of the primary pillars of his administration, with the release of his Sustainability Plan contained in Executive Directive No. 7. LASAN plays a critical role in this initiative.

The City of Los Angeles has embarked on an ambitious goal of becoming a zero-waste city, a 90 percent reduction in landfill disposal by the year 2025, including the city’s Private Hauler Franchise Initiative. Resource recovery is at the center of the city’s solid waste management strategy. LASAN has embarked, jointly with Los Angeles Department of Water and Power, on the development of the One Water LA Plan to integrate all water-related planning efforts in support of Mayor Garcetti’s Water Executive Directive No. 5 Emergency Drought Response. LASAN has been designated as the lead agency for the implementation of Executive Directive No. 8 – the Clean Streets Initiative.

Zaldivar serves on the board of several organizations, such as the US Water Alliance, the Santa Monica Bay Restoration Commission, Cal Poly Pomona Engineering Leadership Board, and others. He is a graduate of Cal Poly Pomona and a registered civil engineer. He and his wife, Brenda, have three children, sons Enrique Jr. and Alonzo, and daughter Carina.