One water, one future for L.A. 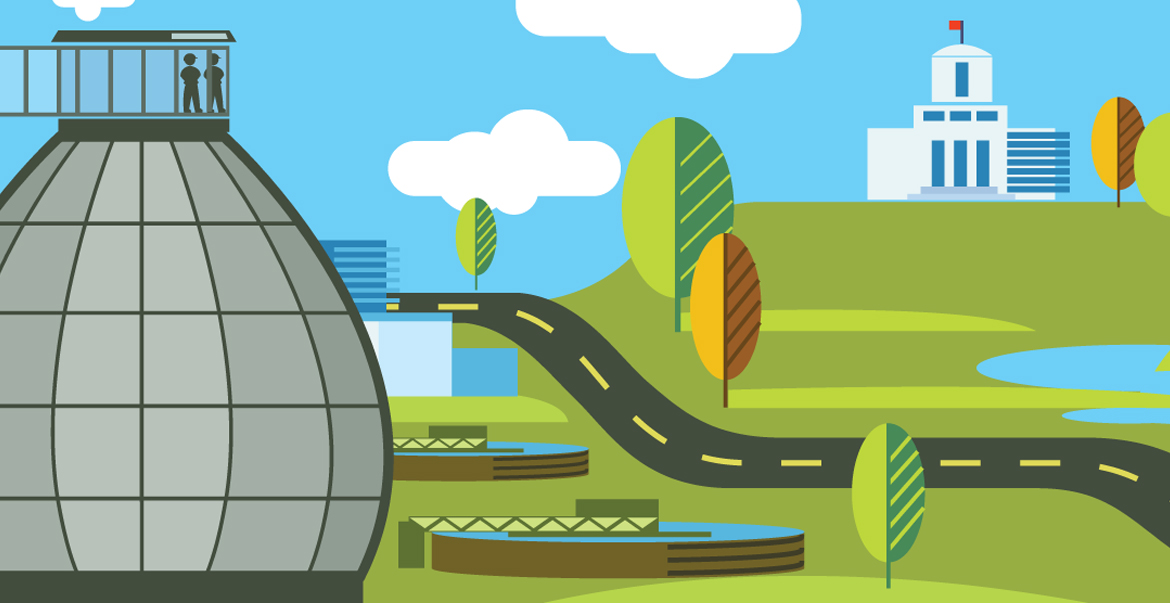 Two parallel initiatives in the water industry promise to reshape the water management business as we know it. The U.S. Water Alliance has spearheaded the One Water movement, a shared vision of a future where there is no such thing as wasted water. Advances in water treatment science and technology, combined with growing populations, aging infrastructures, realignment of regulations, and changing climates are driving new levels of innovation in the water profession.

A separate but equally important effort is the Utility of the Future initiative. In the summer of 2013, the National Association of Clean Water Agencies (NACWA), the Water Environment Federation (WEF), and the Water Environment Research Foundation (WERF) collaborated on The Water Resources Utility of the Future: A Blueprint for Action. This playbook recognized for the first time that a fundamental shift was taking place in the way America’s clean water utilities defined their role in society: from managers of waste to managers of valuable resources. It also added operational efficiency and sustainability to the conversation about reshaping water management.

With lines blurring between water supply, stormwater and clean water management, what might this utility of the future look like? For a preview, take a look at Los Angeles, which is on the leading edge of both initiatives. 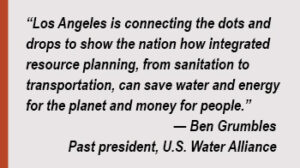 LA Sanitation (LASAN) and the Los Angeles Department of Water and Power (LADWP) are already ahead of the curve. Well before the state’s drought crisis, the agencies were deep into writing the city’s One Water LA 2040 Plan, an ambitious and historic effort to coordinate the work of multiple city departments and community stakeholders to achieve a sustainable water management system. The vision started in 1999 with the Water Integrated Resources Plan, a facilities management program that streamlined infrastructure planning for water, wastewater and runoff.

“We have to be prepared for multiple scenarios, with extremes of drought and flood as well as a changing climate, demographics and available technology,” says Adel Hagekhalil, assistant director for LASAN. “The One Water LA 2040 Plan will ensure that future generations of residents and ratepayers have the most reliable, cost-effective, environmentally sound, healthy water system possible,” Hagekhalil says.

The Water IRP, as the program came to be called, represents an unprecedented approach for sustainable water resources management. Its primary goals were to integrate wastewater facilities management with stormwater, recycled water and water conservation with a planning horizon from 2005 to 2020; and to enlist public stakeholders in the planning process. Adopted in 2006 with the support of hundreds of stakeholder groups, the Water IRP coordinated capital improvement programs for wastewater and stormwater infrastructures, an initial recycled water master plan, a financial plan, and a programmatic environmental impact report.

It’s safe to say that the Water IRP has been a game-changing success. Departing from traditional single‐purpose planning efforts, the Water IRP has resulted in greater efficiency in water resource management with multiple citywide benefits, including energy and cost savings, reduced dependence on imported water, reusing stormwater and conserving drinking water. 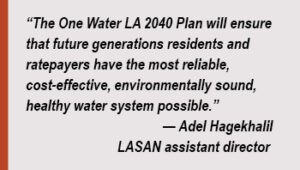 Among the outcomes has been the deferment of about $500 million as a result of the plan’s adaptive management process, a far-reaching low-impact development ordinance, and a 20 percent reduction in water use far earlier than mandated. Broad stakeholder support also helped win passage of Proposition O, a $500 million bond to fund multipurpose water quality and stormwater management projects.

The program was awarded the 2007 Grand Prize for Planning from the American Academy of Environmental Engineers and Scientists, and the 2011 U.S. Water Prize from the U.S. Water Alliance for outstanding achievement in the advancement of sustainable solutions to America’s water challenges.

“Los Angeles is connecting the dots and drops to show the nation how integrated resource planning, from sanitation to transportation, can save water and energy for the planet and money for people,” Ben Grumbles, past president of the U.S. Water Alliance, said in 2011 of the prize-winning project.

Marty Adams, LADWP’s director of water operations says, “While L.A. historically sourced most of its water from the snowpack in the Eastern Sierra and other imported supplies, L.A. needs and deserves a more resilient and sustainable supply that originates right here in-basin. L.A.’s water future will rely largely on increased stormwater capture, maximum development of recycled water sources, and full use of our local groundwater basins. We have made great strides with this, and continue to do so with the support of our elected officials, community members and our partnership with L.A. Sanitation.”

One Water LA 2040 builds on the success of the 2006 Water IRP, while also addressing concerns that have emerged or grown since that plan was finalized. Among these is the advent of exciting new water recycling technologies. “One Water LA is an extension of a process that was already in place,” LASAN’s Roshanak Aflaki says. “A lot has changed since 1999, especially in the area of water recycling.”

Aflaki should know, too, because she is spearheading one of One Water LA’s signature reuse projects.

The Donald C. Tillman Groundwater Replenishment Advanced Water Purification Facility Pilot Project is an innovative program to research and test the latest water recycling technology, and will use the findings as the basis to transform the plant into an advanced water purification system, capable of putting 30,000 acre-feet (9.6 billion gallons) of water per year back into the ground. Los Angeles now recycles about 8,000 acre-feet of water per year — 4 percent of its total supply. 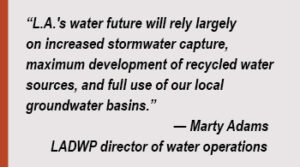 “When this project is complete, this plant will make it possible to replenish some of our stressed aquifers and allow the city to take a major step forward toward a future of water independence,” Aflaki says.

For a city that was built with massive water infrastructure investments in reservoirs, dams and aqueducts that bring water from sources hundreds of miles away, and that has long been dependent on imported water, the goals of One Water LA 2040 are high — and the stakes are arguably higher.

“Los Angeles has grown into the great city it is today because of water,” Hagekhalil says. “One Water LA will reshape water administration in the city by managing all water — recycled water, groundwater, wastewater and stormwater — as a single resource.”