The ‘water as a service’ mindset

Promoting clean water as more than a commodity, utilities are seeking to educate the public 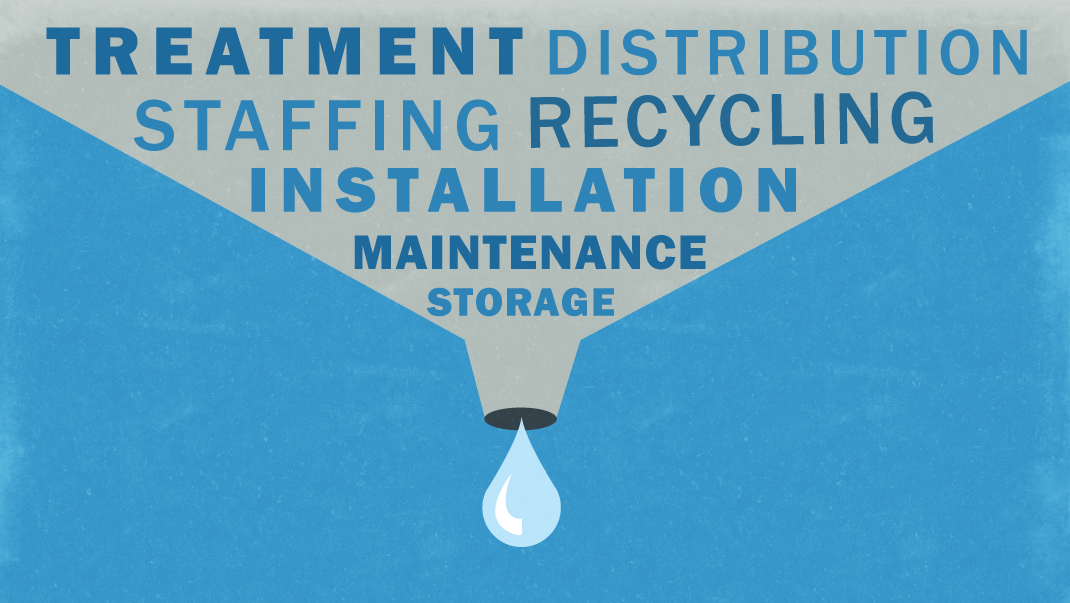 In the early days of the mobile phone, Verizon ran a series of ads with a technician walking across the country through wheatfields and across snowy mountains, all the while asking, “Can you hear me now? Good.” The point was to tout Verizon’s commitment to building a high-quality network for its customers and justify the cost of their wireless plans. Subsequent ads featured hundreds of network engineers and technicians standing behind the guy with the phone, indicating all of the people and technology that lie behind that handset.

Verizon was selling its network, not phones. And it worked.

Water managers are starting to take a similar approach to a public that perceives water as something that, perhaps like good mobile phone service, just seems to be there when we need it. Water does fall from the sky, but customers need to fully grasp the concept that rain is just one small part of the water cycle. Some have already made the transition from a public outreach campaign that emphasizes the value of their product to one that focuses on the service that’s being provided.

ACWD: Water as a service
“As an industry, we haven’t been doing ourselves any favors by stressing the commodity of water,” says Robert Shaver, General Manager of the Alameda County Water District. “Delivering water to our customers is more than what flows through the tap. Our service includes the treatment and delivery of safe drinking water so it is available when they want it, where they want it.” 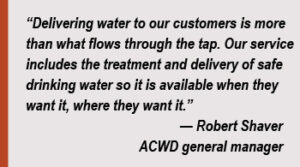 Shaver is a proponent of “water as a service,” a mindset that emphasizes the value of water treatment and distribution in addition to the importance of the final product. “There is a lot of work that occurs behind the scenes,” he says. “Actions to ensure the ability to deliver fire flow levels to a home in the event of a fire. That’s how pipes are sized. That’s part of the service people are paying for.”

The cost of delivering the service is largely fixed, regardless of how much water people use, he says. The fixed cost of water treatment distribution is especially important during droughts when conservation is heavily promoted, and people find themselves using less water but paying more for it.

“We have a unique business model,” Shaver says. “Nobody else tells their customers to use less of their product. But ACWD has had a comprehensive suite of conservation programs for many years and we believe that in the long-run, conservation saves money.”

He points to the recent decision by ACWD to decommission the Mission San Jose Water Treatment Plant. The district’s customers have cut water use by 36 percent from July 2013 to July 2015. Residents are installing more efficient fixtures and drought-tolerant landscaping.  The decision follows comprehensive studies that conclude the district will reliably meet projected water demands without the plant, and will avoid $4 million in upgrades and claim ongoing annual savings due to the elimination of operating expenses.

“Our peak load — when customers use the most water — is down from twice the normal use to 1.4 times normal use,” he says. “That reduces the capacity we have to build for, which also reduces future infrastructure costs.”

Still, the public should be prepared for rate changes. “We have to plan at least 25 years ahead to ensure a reliable water supply under any conditions. Water rates are an investment in the quality of life in the community,” Shaver says.

One answer may be to give customers more control of their service, with different rate plans for different preferences. “You can choose to get a bigger trash can if you need it. You can choose to add more services to your phone or television contracts,” he points out. “People expect to pay more when you’re tapping the same infrastructure for more service. One example is that, in partnership with a private company, ACWD offers its customers service line repair insurance for a nominal monthly fee.

“We’re working to explain to our customers what they’re paying for. It isn’t just a glass of water on a hot day. It’s also everything behind that tap — a system of treatment plants, storage facilities, pumps and pipes that require maintenance and renewal to be effective.”

IRWD: Ahead of the curve
The Irvine Ranch Water District is a pioneer in conservation-based pricing and in garnering public support for the true cost of water. IRWD might provide a model for some agencies struggling with lower supplies due to drought or growth. They’ve got a head start by a couple of decades 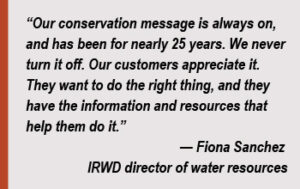 “We started conservation-based pricing during the drought of 1991–92,” says Fiona Sanchez, Director of Water Resources for IRWD. Their system is allocation-based, so each customer receives an amount of water they can use at a low price point based on factors like household size and landscaping features. There are rewards for using less, and costs for using more. Users appreciate that they are able to change their allocations if their circumstances change. “Our approval ratings have been 95 percent positive,” Sanchez says.

The district also provides tools for customers to monitor their use, and offers free audits ranging in service from leak detection to behavior patterns to help customers cut water use. This gives customers the support they need to stay within their allocations.

IRWD has also achieved widespread public awareness of the “true cost of water,” meaning all the infrastructure and people — the service — behind the tap. “We’ve been giving free public tours of our facilities for more than 20 years,” Sanchez says, adding that if you want to take one, you have to get in line. They often sell out.

Like Alameda County, IRWD is working toward a long-term, local, diversified water supply. Recycled water has already exceeded 25 percent of total water use, and the district’s dependence on imported water has been reduced from 62 percent in 1990 to 28 percent in 2013.

“Our conservation message is always on, and has been for nearly 25 years,” Sanchez says. “We never turn it off. Our customers appreciate it. They want to do the right thing, and they have the information and resources that help them do it.”

Orange County has led the way as a model for recycling water, but here’s what’s being done to do more

Irvine Ranch has a rare take on tiered water rates

Do you pay Irvine Ranch for water? Your rates may go up to help cut usage

Island nations benefit from ‘water as a service’